Landscape Photographer of the Year 2012 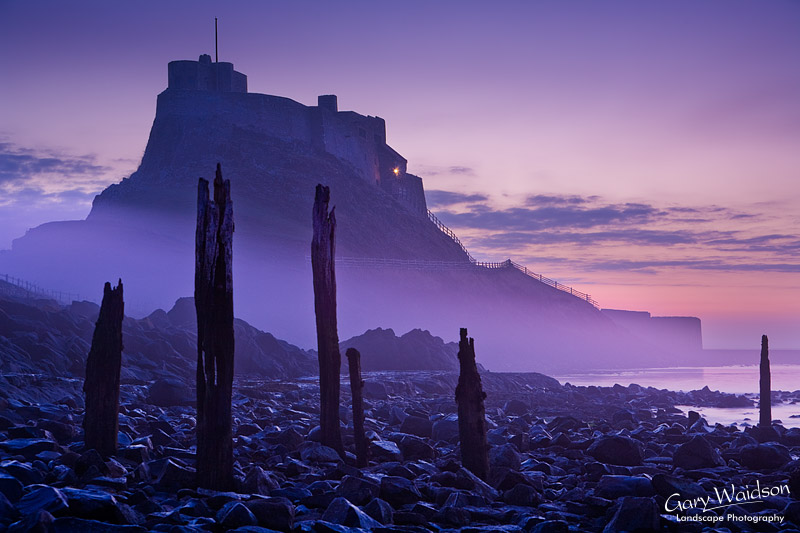 In 2010 I mentioned that take a View, the Landscape photographer of the Year competition had become a benchmark that I measured my photography by.

It was therefore a personal disappointment not to get anything into the short list let alone the book last year but that perhaps reflected my growing workload due to the success of my living history business. As much as I wish I could dedicate more time to my photography, earning a living must come first.

I re-examined some of my work this year and reprocessed some old favourites from the original files. As a result this shot of Lindisfarne Castle finally made the book.

In my experience it is rare to get such a calm morning on Lindisfarne that a mist really lingers there.

I had walked down into the harbour well before dawn and as I approached the castle this mist was lazily drifting around creating ever changing scenes of pastel colours and hazy shapes.

The tide was low but rising and the posts of the old pier seemed to echo the outline of the fortress.

I usually work near the coast in a pair of Wellington boots and on this occasion I was very grateful for them. The water seemed to be rising much faster than the sun and I had to wait for the light to gain enough strength to lift the dark rocks in the foreground.

By the time the light was right and the mist just so, the water was scarcely an inch from the tops of my boots.

Incidentally this shot was from the same shoot that earned me a commendation in 2009 which just goes to show how important having the right conditions can be.

I did have one other shot that made the short list but in the end was not chosen for the book.

This is more recent. I first noticed these sea defences in 2006. I definitely reconnoitred them in 2007 but it was not until early this year that I finally decided how I would shoot them.

It seemed to me that the scene already had an otherworldly feel to it and I thought that a monochrome infrared capture would help to enhance that appearance.

Consulting the tide tables I timed my return from another location further West to get me there with plenty of time to set up at the best viewpoint.

In April, a couple of months after this shot was taken, a cargo ship ran aground here in a storm leaking oil as it foundered. I haven’t been back since but I wonder if this shot is even possible anymore. 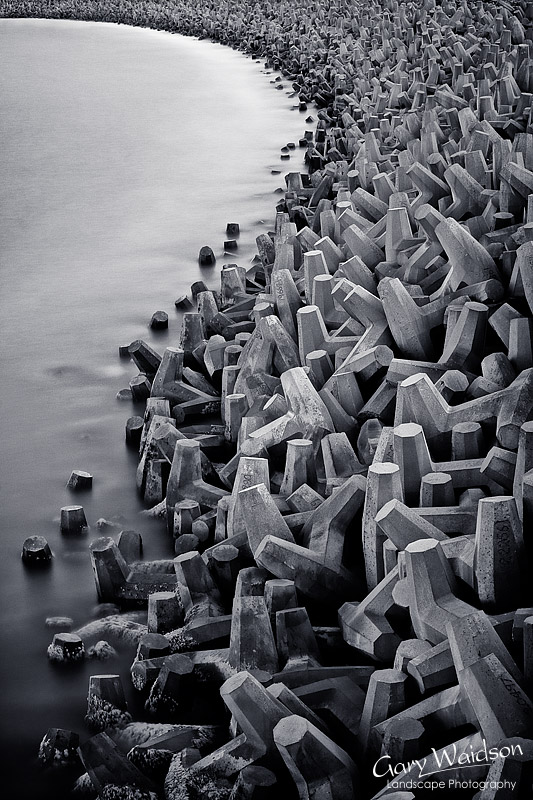 Postscript: Sadly there has been some controversy about the competition this year. It’s not the first time and it probably won’t be the last. I won’t go into details but the photography forums and blogs are full of it as usual and a quick search will find more than enough to satisfy your curiosity if that is what you enjoy. One of the most vocal bloggers, who performed an almost forensic dissection of the controversial photographers work this year, has even attacked one of my entries in the past for being “clichéd”.

He didn’t bother to use my name, so I presume he had little knowledge of the rest of my work to go on, but it would appear that I did not meet his requirements as a photographer who deserved better recognition. So be it, we can’t all be in the cliques that believe they have the exclusive moral right to declare what is or isn’t “landscape photography”.

I can see some merit in that argument but that would naturally leave new talented photographers at a disadvantage compared to established professionals able to dedicate more time and effort to their photography.

Another argument is that the competition should be judged by photographers rather than people from other fields. On the face of it a worthy proposal but again, within the tight knit and cliquey circles that such photographers move in, the danger is that anonymity would be difficult to maintain and once again new talent is at a disadvantage.

My feelings about the matter are relatively simple. All such competitions have their flaws and compromises. We are not measuring the fastest, the longest or the most accurate in the way that Olympic Medals are awarded. We are asking for subjective judgements that are subject to taste and fashions that change almost by the day. There are rules of course and they are there to provide as level a playing field as is possible but even they are subject to interpretation.

The real question should be, where is there a better competition for British landscape photographers?

When Charlie Waite started “Take a View” he created a real showcase for landscape photography in this country which offered the chance for anyone to gain recognition and interest in their work. For once this was not about who you knew or which clubs or courses you attended, it was about letting the images speak for themselves.

It is very easy for people to sit on the sidelines pontificating about how much better it would be if they were doing it. It just seems a lot more difficult to get off their backsides and actually do it.

In spite of the controversies and critics, I for one will continue to support the Landscape Photographer of the Year in whatever form it takes in the future.   Long may it last.

Take a View. The Landscape Photographer of the Year 2013