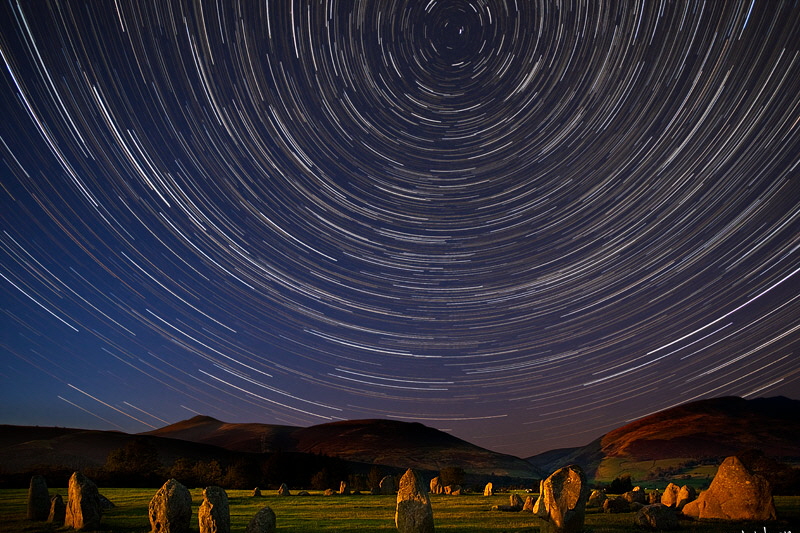 The Carles at Castlerigg.

The foundations of this picture were laid down at Lodge Park in Gloucestershire but this is the sort of image I wanted to create.

I have photographed the Carles at Castlerigg many times but I’m always looking for something a bit different. It seemed to me that the technique of stacking multiple exposures that I had tried out in April would be perfect and most appropriate for a shot of this ancient stone circle. All I needed was a clear night, not easy to come by in Cumbria I must say.

I watched the weather reports for a good high pressure system and bided my time. a late burst of summer seemed to be just what I needed so off I went.

As usual the circle was busy at sunset but I found my spot having checked the compass for the celestial alignments. By the time the last direct light of the sun was playing over the stones most of the people had gone and I got an empty shot for my first frame.

I settled down in a folding chair by the tripod and waited for darkness to descend. Unfortunately I was not the only person waiting as a couple of Crusties soon arrived and proceeded to play loud music and smoke pot right in the middle of the circle. As if that was not inconsiderate enough when they ran out of dope they decided to pitch a tent for the night, presumably because they were too stoned to actually leave.

Fortunately none of this would affect my picture but it did remove any possibility of a dawn shot which I had hoped to make an alternative version with. 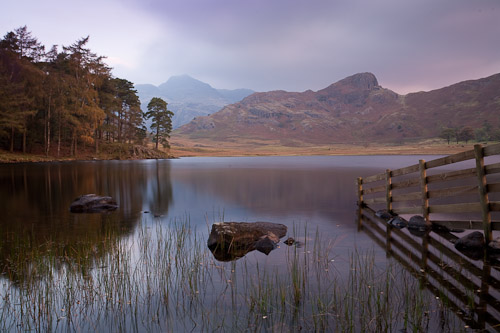 As a result I had to find another location for the morning and I was left with this pleasant but unexciting shot of Blea Tarn instead.

I have no doubt that those dopeheads felt that they had as much right as anyone else to use the stone circle for their pleasure.

It’s just a shame that by doing so they prevented about half a dozen photographers that arrived next morning from enjoying the place as well.

It is also very fortunate for them that despite their stunning lack of consideration, someone did not decide to call the police in while they slept it off.