The day started damp and drizzly. A bit of mist about but the sort of grey sky that knocks the life out of almost any subject. I’d spent the previous afternoon scouting around with the Bronica in Ribblehead and Birkdale without too much luck.

I’d had my eye on Hodge Close for a while but it seemed a tricky location. There were only three practical ways down into it. One was via the adjacent quarry which brought you to a platform over the water, just visible on the left. Another was by a difficult scramble over a mixture of broken rock and scrap iron dumped at the far end of the close. The last route was by rope which still left the question of how to get back out.

I thought the weather conditions as they were, would suit the rock surface and I had been experimenting with making panoramic images by stitching together shots from my Nikon digital compact.

I set off with the intention of shooting a panoramic from the platform. I was in for a surprise.

Since my last visit a huge amount of rock had been tipped into the Southern end of the quarry. This did a lot to relieve the eyesore of dumped cars and refrigerators but more importantly for me, made the scramble into the close a much safer bet.

Leaving the Broni in the van I grabbed a tripod and the compact and started down the scree.

Of course, having descended to this part of the quarry I now regretted not humping the  medium format film gear down with me. This was a viewpoint I had never actually got to before and sure enough the soft light and the dampness of the rock brought the texture out beautifully.

The water was dead still and the greenish tint is probably from the abundant copper ores in the area.

I took a couple of Raw frames then changed over to Jepg for the panoramic components. I shot 12 vertical frames to make sure I had all the detail I needed. The final file is about 23mp. which I felt would give a decent 40” print length.

I experimented with a vertical panoramic shot which really did not work out and then climbed back out of the quarry.      Click the image above to see larger versions.

At the top I stopped to take a frame of the sky to fill the patch of sky in the top of the panorama which I knew the sensor could not have held against the rest of the shot.

Job done I thought. I contemplated taking the film camera down to do anther shot but the drizzle had returned and the reflection was now less good.

It was not until the Raw files were on the computer that I started to look critically at the individual frame that came to be my favourite of that day. 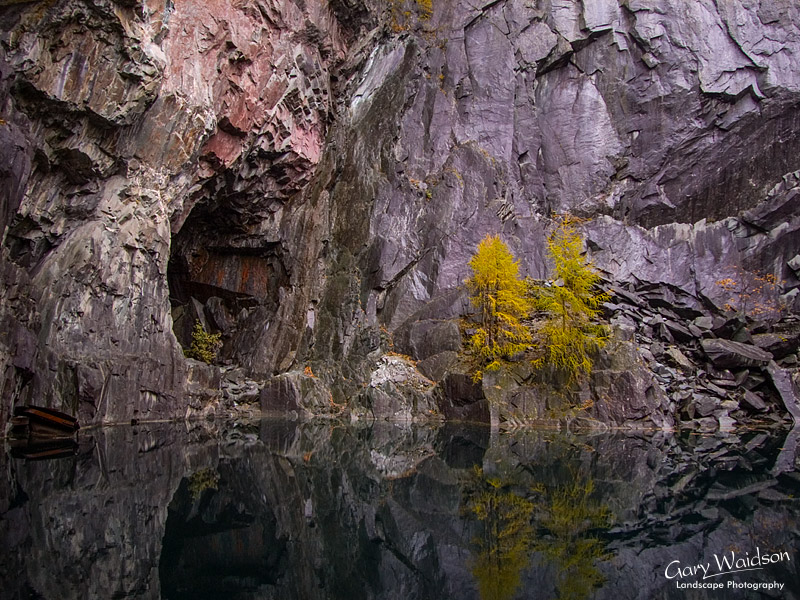 If there was ever a single moment that I realised that digital photography was going to be a real contender, then that was it.

I had not taken the Bronica because it was too heavy for the awkward scramble down the rocks but here was a picture that looked good enough for a comparable print. My most regular output from 6x4.5 was a monochrome print of about 12”x10” or a transparency.

This light little compact was producing a good 10.5”x8” colour print and with very little interpolation a 12”x10” was certainly an option. There is no doubt in my mind that I looked at my photographic equipment with completely different eyes from that point on.

On the other side of Tilberthwaite Gill I spotted some interesting cairns that seemed new and very carefully built.

I returned next morning to catch the light on the opposite hillside and lighting up the Autumnal trees. 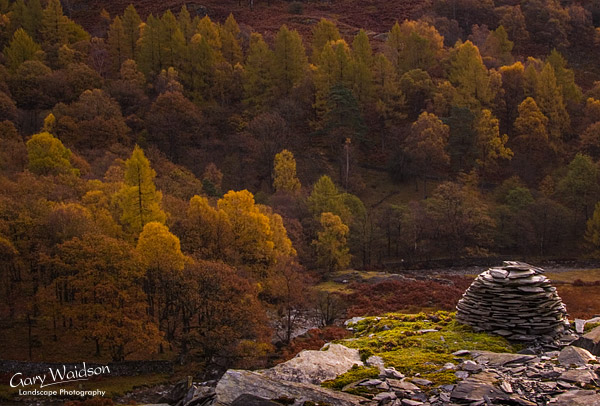 I poked around the ruined workings a little while longer before deciding to change location.

With the  light growing stronger, I headed for Little Langdale in the hope that the calm morning air might leave a good surface reflection on Blea Tarn. 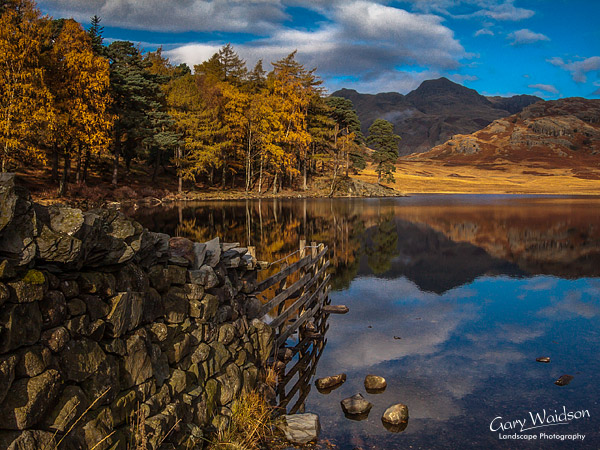 Indeed my luck held and there was enough variation in the light to shade the Langdale Pikes in the distance.

However, it looked like cloud was rapidly moving  in from the West so I set my sights back on Birkdale to the East and some of the features I had scouted earlier.