The Carles of Castlerigg 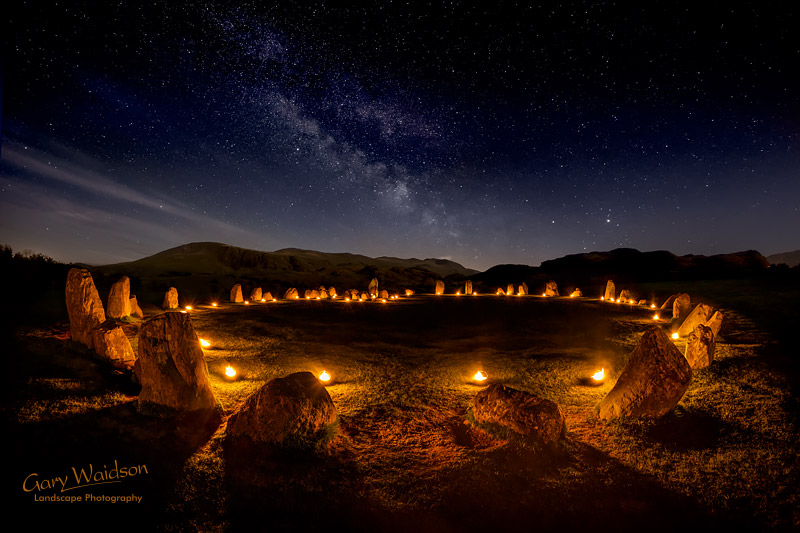 Every now now and again I get a mad idea.

I had already decided to have an overnight photo shoot at one of my favourite locations, The Carles at Castlerigg. The original plan was to do some light painting on the stones with a hand held flash unit and then experiment with a new gadget called a PixelStick that I've acquired. More of that later.

The weather forecast was good, high pressure holding clear skies over  the region and the hope was to get a decent shot of the Galactic Plane  rising over the Helvellyn range in the distance to fill the sky as well.

Then while I'm lying in on the morning of the shoot I get the idea... What if the sky isn't so good? I'll have an hour or so spare on location... Perhaps there is another way to light the stones.

I thought of candles but they would blow out, candles in jars would look wrong. I have some Viking style oil lamps but not enough of them and  they are difficult to move when lit.

What I needed was a portable fire...

I needed something to put one in that would protect the ground surface. I had an old cast iron glue pot with legs that would fit that bill. It  also had a handle that would make it easy to move. I just needed a hook  with a handle which I could easily make with an old tent peg and a bit  of broom handle.

I worked out how to build a compact fire which would fit into the pot and give me the chance for multiple attempts if needed.

The game was on.

We arrived before sunset to find a collection of camper vans parked near the circle which was potentially a problem. It wouldn't be the first time I had attempted an overnight shoot here only to find it the venue for a party of some kind. This is a popular location for all sorts of people, not just photographers.

I was accompanied by a friend, Jim, who was also interested in doing some light painting and we cased the scene, looking for the best angles  of view, while we still had enough light to set the focus.

I had two lenses I thought would do the job, both f2.8 so fast enough for the Astro shots but wide enough to encompass the whole circle from fairly close in. I decided on my positions, marked them with short twigs stuck into the ground and set the focus points, being careful to tape the focus dials so they would not move while handling the lenses.

My intention was to use a tracking mount for the Milky Way shots but this was the point that I discovered that I had neglected to pick up the case from home with the Polar Scope in it which made it impossible to set up. A bit of a blow because that would mean I would have to ramp up the ISO and use shorter exposures to reduce star movement. That would increase the noise levels, a potential loss of quality.

We set about the planned light painting shoot as the light levels dropped. The sky was not quite clear with a few wispy clouds scudding through but good enough. This took us through to about eleven when Jim  decided he was getting chilled and wanted to return to the van to warm up. I was still fine, you've got to like wool when it does it's job well.

This meant that I could move into my front viewpoint without getting in Jim's way, something I had been concerned about.

I lit up the fire pot and while it was getting started, I set about sorting my camera out. Finding my peg and using a laser to check my  framing, I set up with the wider lens and fired a couple of test shots  to check everything was working to plan.

I have a radio trigger which allows me to fire the camera at a distance. This meant that I could move the fire pot, duck behind a stone and take the shot without having to return to the camera each time, something that would save a lot of precious time. The sky would start to get  lighter from about three am.

So the procedure started. Set the fire pot in front of a stone, hide and shoot. 54 times for the first sequence. This had to be repeated for a longer exposure to fill in the mid tones. That took about an hour.

Jim returned just as the second sequence was completed and we noted that the sky was even clearer now which made it ideal for taking a sequence  of shots of the Milky Way which I could stack in the computer to reduce the noise levels.

As these shots were completed, I moved back so Jim could get his shots without me in the way and moved the fire pot away from the circle, onto bare earth so it could burn out safely.

The twilight was growing so with that done, we moved to another location for the Sunrise before driving home.

Any sane person would have gone straight to bed at this point but I decided to spend the next few hours constructing the image you see here from the one hundred and eleven useful RAW frames I had from the shoot.

Simple this photography lark isn't it? 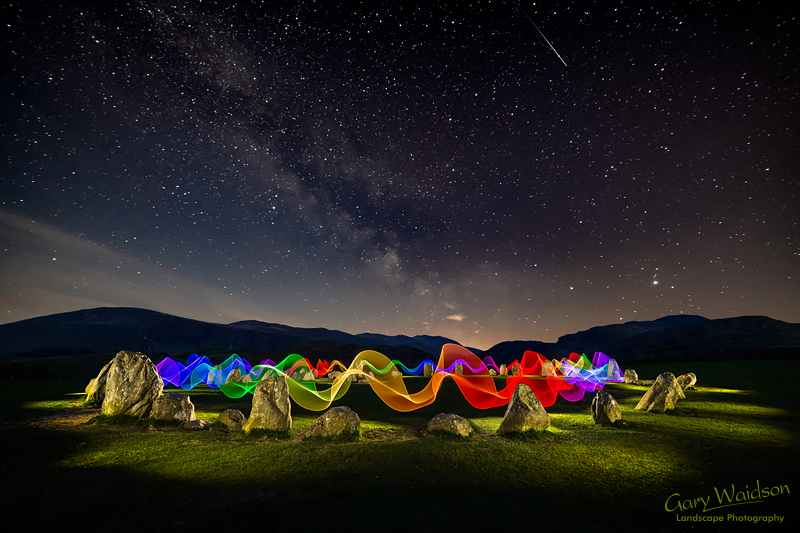