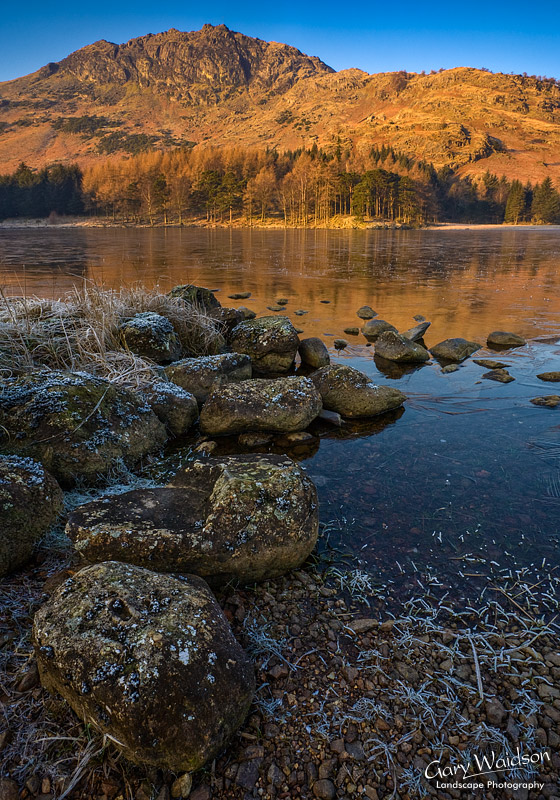 I’ve been out on many cold mornings, waiting for the sun to rise, but this morning was bitter.

Normally our nose and throat warm the air we breathe before it hits our lungs. On this morning I could feel the frosty air burning deep in my chest.

We’d been in the grip of a high pressure zone all week and the temperature had plummeted while the days had been clear and fine.

Unfortunately, due to work, this had been the first day I had been able to get out and really enjoy it.

The tarn must have been frozen most of the week as the surface was scattered with hundreds of things that people had thrown onto it.

It’s a kind of petty vandalism that no one thinks much about I suppose.

Those people that first come on such a pristine scene, very often do not consider that by disturbing it or smashing it up they are depriving others of that untouched environment they themselves enjoyed.

There is an old mantra amongst true outdoorsmen. “Take nothing but pictures, leave nothing but footprints.” Sadly it is often ignored by the thousands of visitors such places attract.

One fortunate side effect of the cold was that the boggier areas that are normally difficult to get to were on this occasion frozen too.

The frost had formed delicate crystal structures on the vegetation that would vanish as soon as the sunlight touched them so it was a matter of timing to get the warm light on the far bank but not yet on the foreshore.

The cooler bluish light on the foreground reflected from the sky also naturally enhances the frosty feel in the picture.

We had the rest of the day ahead of us and I was certainly pleased with my first results.